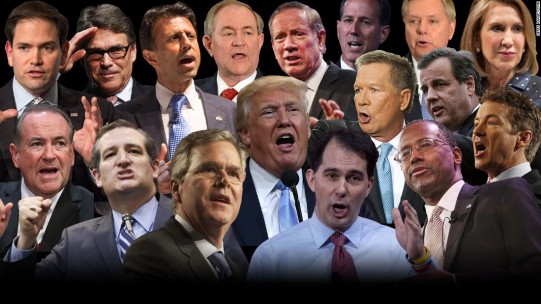 Everyone has their take on the GOP debate. I have rarely ever watched a debate in its entirety between two presidential candidates let alone a republican nomination debate.   I do not enjoy politics. I have my own opinions and they will remain my opinions. However, since Donald Trump got into the game it has become interesting. Not just because its Donald Trump but because of what he is saying. Perhaps his delivery needs a little work … ok … maybe a lot of work but he is as Ohio Gov. John Kasich said “striking a cord” with the American people. (I think it was him that said that)

However, and this is the big HOWEVER; I feel Trump needed to do more than just reiterate that we are losing to China, Mexico, Japan. That we need a wall to protect our borders … yada yada yada … I will give him full points for having the guts to raise his hand and let everyone know that he may run as an independent (a complete set up by Fox amongst others) and that’s the one thing I feel we can always expect Mr. Trump to do. He will not buffer it or filter it. If you ask him a question he’ll most likely tell you the truth whether you like it or not.

But … we needed more from him. Something more specific. Something that resembles a plan. Clearly Fox tried to disparage him and deliberately put him on the spot (who does Fox’s makeup by the way … awful) more so than other candidates. I hope Trump takes the next few days and really take the stage with something concrete. I do wish I could have written his closing statement.

Next … the winner? In my mind it was definitely OH Gov. John Kasich. He actually seemed honest and concerned. Well balanced and composed. His answers where not deliberate and rehearsed (or he could have practiced to not sound rehearsed) and he has the experience.

The surprise? Ben Carson. A neurosurgeon. Seriously! What a great sense of humor and on point. Even when asked a specific question about how we treat war criminals, his answer was impeccable without saying yes or no directly to whether he favors water-boarding.

Ted Cruz, all I could see was Nathan Lane from The Birdcage.

Marco Rubio, too young and rehearsed

Rand Paul, serious anger issues and it shows in his hair

Jeb Bush, He’s going to call his brother and dad and ask “What would you do?”

Carly Fiorina, I’d love to see her and Hillary duke it out on stage … verbally of course

So that’s it. I have to stop here or I may stir up some serious trouble for myself if I continue without a filter. Stay tuned for my next blog … 3 things we have in common with all politicians

Cant wait for the next big debate.

A lifetime in 5 minutes …

Random thoughts or so I thought