this too shall pass … or will it?

Image of a moth boll magnified 1 million times (again, no clue here) But it looks pretty.

We have now lived through what has been touted as unprecedented times. The global population has been asked to lock themselves indoors.  Some areas are controlled more than others but for the most part, the message is the same; Stay indoors!  Social Distancing is the new term and norm.

Facial masks are no longer an unusual sighting.  We’ve gone from not having to wear one, to wearing them regardless of outdoor activities. Even though we have 100 different and opposing opinions on what works and what doesn’t. Unless you’re wearing a Gucci mask. Those work just because of the cost and brand (I actually have no idea, my disclaimer). Gatherings are not allowed.  We went from public gatherings of 50 or more being banned to 10 or more being banned and now any gathering in public is not permitted.  Although I question the sanity and compliance of any of this. Just look out your windows. Or on Facebook.

The COVID-19 epidemic is being called the worst ever yet but when compared to other viruses or pandemics, it pales in comparison.  Why is there so much controversy around this virus?  Why is there so much misinformation?  What is driving all this?  The numbers don’t make sense. Conspiracy theorists are popping up everywhere with their messages of impending doom through government and alien control.  I see posts from those in Italy and in the US and it’s hard to ignore.  What if its true? What if I/we do nothing? Would we be responsible for world domination by the elite of the human race?

This all contributes to the stress levels and anxiety most are feeling. There is so much negativity that surrounds all this.  I just want to go to the beach. But only today the beaches in San Diego have finally reopened for walks. And we still have to practice social distancing.  Ice cream helps but only if its lactose-free and I have some fruit to dress it up because let’s face it, it’s not as good as regular flavored ice cream.  I’ve cooked more pasta dishes than I have collectively in a couple of years in just 5 weeks of isolation and let’s not talk about the wine.

The gym beckons my name and the scale avoids me for fear of malfunction abuse. Yes, I will climb on and off until the desired weight shows on the screen. Maybe it’s the batteries. Going to the dog park seems to satisfy my need for being outdoors but I seem to spend more time avoiding people because the parks are jammed with non-social distancers and their dogs and the shit they fail to pick up.

God, I want this to be over.

I’m grateful my family in Italy is safe for the time being. But they’re locked down in a way that even Mussolini is looking at it and smirking saying “I never did this shit when I was around. What a novel idea”

It’s time to loosen the noose and let life restart. We’ve hit the reset button. (I think we’ve hit bottom as well). Spent trillions on disaster relief.  The aftermath has yet to be truly seen from an economic standpoint. We’ve learned more about ourselves (hopefully) over these past two months.  We know more about our employers, friends, family, support group, religious or spiritual beliefs because I am sure we have encountered and questioned all of it.

The real questions are: Did we listen, and have we learned? And if we did, in fact, learn anything, are we strong enough to hold on to this newfound value or rediscovered moral compass or whatever it is that is now dear to us?  I think we are astute enough to see and read past all the BS thrown at us.  Because honestly, you cannot believe any news that states they profess to tell the truth and sadly, they all say that. So dig deep. Grow a pair, pull them up, and stand up for yourself and the human race. 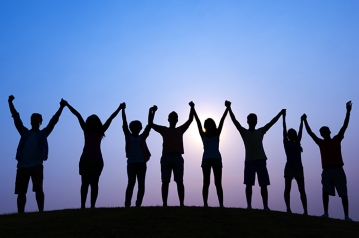 We’ve always known! We’ve just chosen to ignore it for a very long time. But its time. We will not get this chance again to do the right thing.

Together … one united front.

Together, we can do this. And by “this” I mean not just make it through this episode of a lockdown and pandemic, but move into a new way of living and being.

Insieme c’e` la faremo. (as they say in Italy)

Random thoughts or so I thought

You are (not) alone